Sheriff David Clarke on  “Ready for Battle in 2020?”

Sheriff David Clarke on  “Ready for Battle in 2020?”

Following is a report by Carol Pociencha Palm about Sheriff David Clarke’s talk to Republican Women’s Club of Waukesha County, Wisconsin on December 2, 2019

Sheriff David Clarke talked about touring the country with Trump in 2016. He said it’s important to communicate a vision that people start to see not just hear, people have to see what you are talking about. When that happens you have resonated with them, you have connected with them and they will go along for the ride.

He was elected 4 times in a hard-core democratic county (Milwaukee) as a conservative.

Washington DC is a mess, a sewer… He worked for America First promoting the President’s policies. He moved to DC, but it’s nothing but traffic jams. He also traveled around the country… he was welcomed everywhere by conservatives. He left DC, was on Fox TV a lot, he wasn’t being paid for that.  He was told Fox ratings went up when he was on for interviews. Bill Shine asked him to join Fox. But the Murdocks took over and they are liberal.

Now, Sheriff Clarke writes a conservative blog on his website. He has taken on the building the wall, the illegal immigration situation because it’s destroying America. The southern border is a mess, he has been there 5 times in 2019. He has been to three different sectors. The border is divided into eight sectors altogether. The terrain is different in varied parts so in some areas a caravan could not go through. The President wants to build a wall in weak points where it is passable to bring an illegal caravan. He is with the organization “We Build the Wall” (https://webuildthewall.us). This is one of his projects. 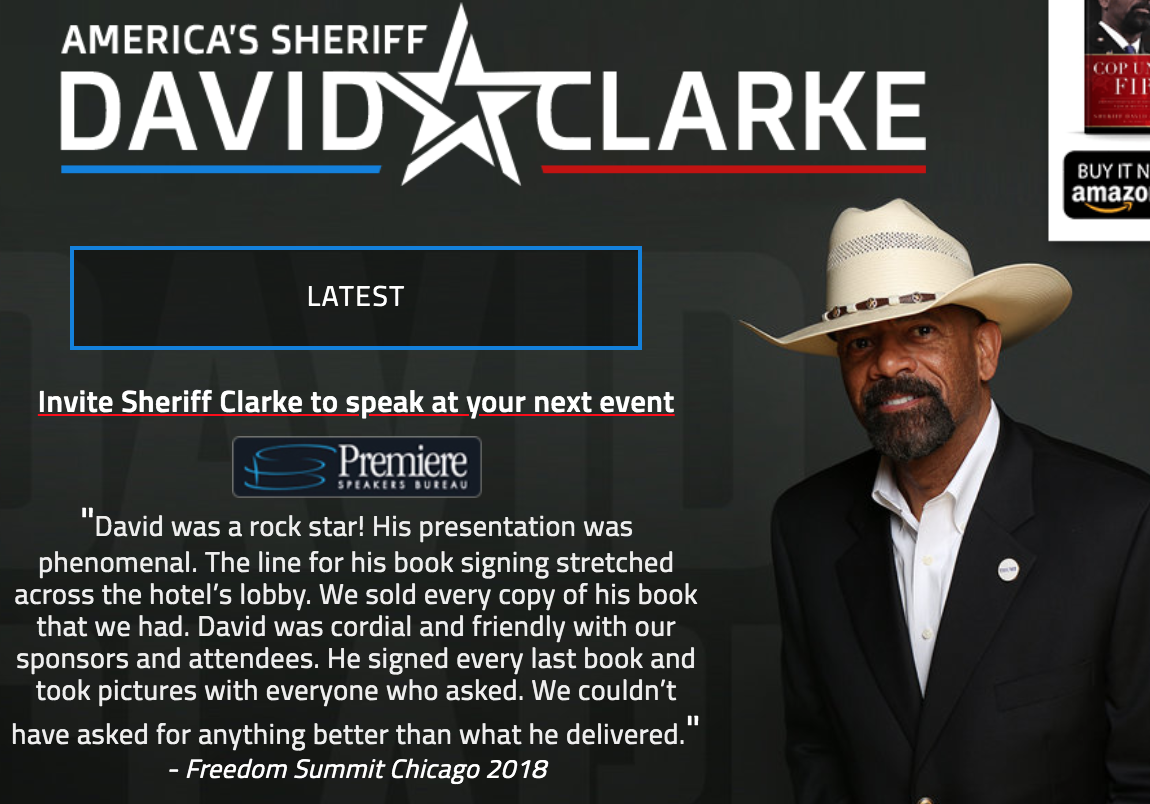 Sheriff Clarke describes himself as a foot soldier and he fighting for freedom, liberty and the United States. He wants to see people elected to office who will help this President. The President has said “I need more fighters in Congress.” He doesn’t have enough fighters… real fighters not just metaphorically. He said we are under siege, meaning those who believe in the founders of this country, its principles, the constitution, the rule of law, due process, Second Amendment, more rights for the states, all of the things pertained in the constitution. The constitution protects individuals, not groups. You don’t get your constitutional rights from groups, these are individual liberties… individual freedoms, these things are being washed away. The left has declared war on cops, they have declared war on the Constitution, they have declared war on the rule of law, due process…remember Brett Kavanaugh?

A member of the Democrat party in Congress said Brett Kavanaugh is not entitled to due process, so when did that change? We are getting our rear ends handed to us in this fight. Not only do we not have enough people willing to fight, you gotta have the will to fight. This is a tough environment. Politics is a contact sport. The Dems have made it a blood sport. Ask Congressman Steve Scalise, ask anybody who has gone to a Trump rally and been bloodied by Antifa or other goons on the Left. They have made it a blood sport. Sheriff Clarke says he is a fighter and the Left knows that. Sheriff Clarke says he will fight until his very last breath for this Country. People on the Left ask him “How can you support this racist document you call the Constitution when it was enacted your ancestors were enslaved… but he responds, the brilliance of that document and the brilliance of the founding fathers was that with this mechanism we can change it anytime we want. But it’s got to be through the Constitutional process… and guess what, we did, we got it right, 13th Amendment that freed the slaves… and the 14th Amendment… and we got it right through the Constitution…

The US Supreme Court upheld slavery… he doesn’t want those in black robes telling him what to do… and women weren’t initially included, but then there is the 19th Amendment-giving women the right to vote so we got it right. The Supreme Court did not give women the right to vote. He feels the Court shouldn’t even listen to half that crap, the Constitution is clear on that.

Don’t rely on the Supreme Court for your rights.  Read the Declaration of Independence… He is big on the 10th Amendment, more rights for the states because of the overpowering federal government. The federal government was designed to be involved with the military, protection of the Country but it was limited. The Founding Fathers wanted it limited. Look at it today, they are in every aspect of your life. Armageddon, no push back, no fight, not winning a court case… no fight, that’s got to change, because this thing called freedom is slipping away.

It’s not just about elections anymore, but don’t think this ends with elections, the Left, has made it very clear… in their view elections no longer matter. They made that clear after Donald J. Trump was elected the 45th President of the United States. How? With the Electoral College because that is what the Constitution says. So now, the Electoral College is under assault.

Sheriff Clarke always talks about it – this is about freedom and liberty. But those in the positions that are supposed to be about freedom and liberty – don’t talk about it.  The scary thing about elections now, is that the Democrats have perfected the art of lying. They will cheat, lie and steal elections. That’s why if you think we will be okay if we just win elections and everybody goes along… this President knows it is an everyday fight. Many people don’t like the way he fights… Sheriff Clarke says he loves the way he fights.

You know you hear taking the high road and all that… Sheriff Clarke says he is not taking any high road, he is going to get down on street level where they are because they have decided where the battlefield is, and they have decided the rules of engagement. The battlefield is the street, it’s not behind a keyboard pumping out tweets or on social media, it’s not a think tank, it’s not at these luncheons and dinners… it’s on the streets. If we are going to be elected, we are going to have to go out on the street and engage them – we have to develop the stomach for this.

This is not a white glove affair, leave your white gloves at home you won’t need them. Bare knuckles, bring brass knuckles if you got em. And if you insist on gloves make it boxing gloves and put a horseshoe in them.

As he does interviews, he wants to keep people energized, motivated, and have a sense of urgency… we lost our sense of urgency and that’s why we got creamed in 2018. And not just at the base level, more like GOP, RNC, Congress… you have to fight everyday. They have changed the rules of engagement.

So if we beat them we have to go where they are on the streets. We let them set the rules, but they can be beat. The Left is angry. Do you know who was angry in 2016, we were angry… we were deathly afraid of Mrs. Bill Clinton… Donald Trump is President today because he won WI (11,000), PA and MI by a total of 70,000 votes… pay attention to the Electoral College. We need to win Ohio & Florida. No President in American history has been elected President without winning Ohio.

If you don’t think the Democrats can find 12,000 votes by cheating, you need to be afraid of waking up November 4, 2020 and hearing about a new President-elect because that scares the hell out of me. He doesn’t have euphoria others have, landslide? He admires Florida because they never quit, it’s never over, not going to stop. Somebody has to watch the polls – who is going to go to Milwaukee?

A fighter in the political sense… fight to win our freedom from England – a real fight, people died. There was a fight to end slavery in this country, not metaphorically, a war, 500,000 Americans died. A fight to stop the spread of Nazism in Europe, US soldiers had to go overseas and fight and many of them died. Same to stop communism in SE Asia, Vietnam, someone had to go fight.

These fights were not always offshore; the American Revolution and Civil War happened here. He thinks we are at one of those moments now, a defining moment. A fight and it’s not going to be pretty. Somebody’s got to do it, and Sheriff Clarke needs all the help he can get and he needs some of you to come along. Traditionally, women’s groups get left out. Probably why not seeing as much as we could as far as reaching potential in the RNC, some of these guys are walking around in a stupor.

The political right needs a fighting force… an organized ground level force built for the political conflicts in the 21 century. Politics has become a contact sport. This force must be unlike many GOP political figures who want to avoid contact, and seem obsessed with being admired by the Left and the editorial boards of the NY Times & CNN rather than push back against the people seeking to destroy them. Who was it that said you can’t fix stupid?

Someone needs to tell these Republican intellectual elites – the never-trumpers, some GOP leaders – someone needs to tell these Republican elites that someone is shooting at us, figuratively and literally as in the case of Congressman Steve Scalise. In this new age of political warfare, they have allowed the left to dictate the rules of engagement, in return the Left has turned Politics into the art of lying, they control the language, and thus control the narrative.

If anyone thinks the Left will play fair and use traditional methods to win debates and elections is dangerously naive. These political ambushes are the metaphorical equivalent of a roadside IED. Often you don’t know the Left’s blast until it’s too late in the election cycle… when smears or outright lies appear.  (more about Sheriff Clarke at www.americassheriff.com)