While I was fact checking today’s Mises Daily article, I checked some correlation coefficients of my own so I didn’t have to rely on Volokh’s numbers as my only source.

I approached the data a little differently than Volokh did and instead of using a subjective ranking by an organization like the Brady organization, I just looked at the rate of gun ownership in the state. After all, the argument is often that more guns and more gun owners leads to more violence.

So, I looked at the correlation between the gun ownership rate (a percentage on the x axis) and the murder rate (n per 100,000 on the y axis) in each state. The visual result is this: 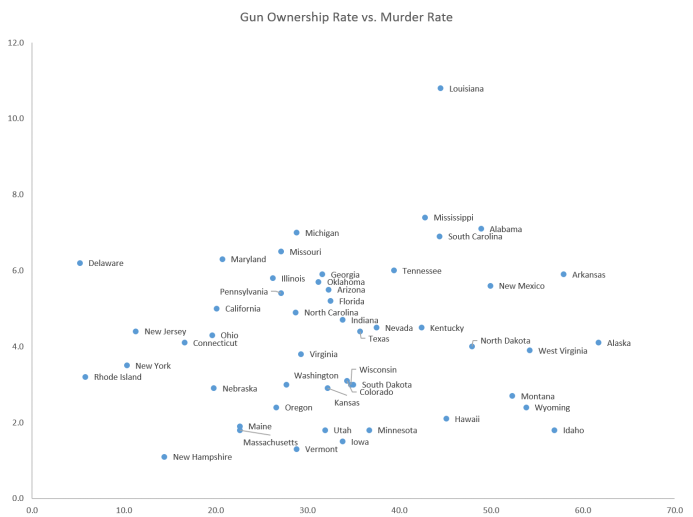 As you can see, there is no correlation. In fact, if you run the numbers, the correlations coefficient is 0.1, which suggests a negligible correlation, or none at all. The murder data is 2012 data from the Justice Department. The gun ownership rate data is from a 2015 report called “Gun ownership and social gun culture.”

Just for good measure, I also went in and looked for a correlation between mass shootings and gun ownership rates. Here, I took the total number of mass shooting victims in all states so far in 2015. This is updated constantly by Mass Shooting Tracker, and includes the most recent Oregon mass shooting. Mass shootings here include a shooting involving 4 or more people, and do not necessarily mean school shooting. They can mean someone went nuts and shot his wife, her lover, and two bystanders at a birthday party when the shooter personally knew all the victims. There are not just cases of random public shootings. If we only included those, the total numbers would be microscopically small. Even with all mass shooting data together, it’s obvious that your odds of being involved in one in any given year are vanishingly small, and less than 1 per 100,000 in 48 states. I’ve included all victims, not just fatalities here. If I used only fatalities, the mass shooting numbers would be much smaller (x axis = gun ownership percentage; y axis = mass shooting deaths per 100,000): 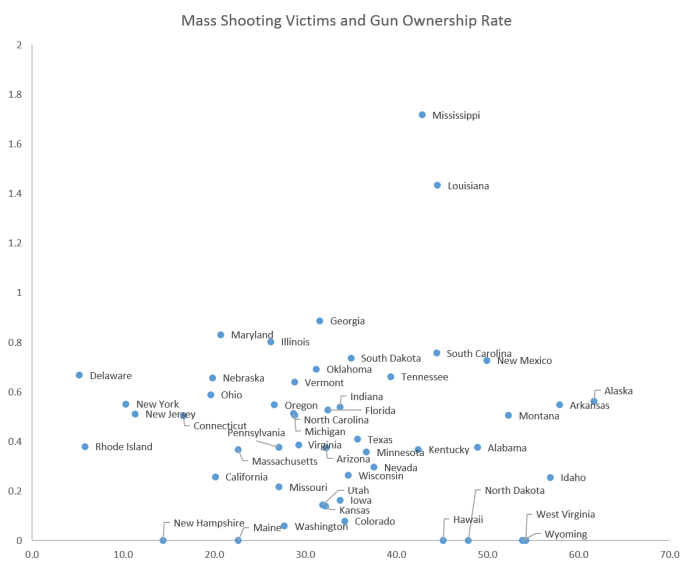 Now, I’ve noticed that when someone points out the lack of a correlation here, gun-control advocates are quick to jump in and say “but you didn’t control for this” and “you didn’t control for that.” That’s true. But what I do show here is that the situation is much more complicated than one would think from absurd claims like “states with fewer guns have fewer murders” and so on. Apparently, claims that new gun laws are commonsensical can’t be true if the relationship between gun laws and murder rates require us to adjust for half a dozen different variables. In fact, by looking at the data, I could imagine any number of other factors that might be more likely a determinant of the murder rate than gun ownership.