Wake up to the CCP Threat

Wake up to the CCP Threat

On December 8, Freedom Faith and Family Coalition supporters attended an alarming, but eye-opening event in Middletown, NY called “Wake Up to the CCP Threat.”

Sean Ling, from the Committee on the Present Danger- China.

Kay Rubacek, author of Who Are China’s Walking Dead? and producer of “Hard to Believe: a documentary about the killing of prisoners of conscience for their organs in China.” Her family fled Communism in Russia and China

Sean Ling explained that as a student, he participated in the Tiananmen Square demonstrations in 1989. In 1999 a senior Chinese colonel wrote a plan called “Unrestricted Warfare,” which includes such things as shipping fentanyl via Mexico and spreading Covid 19 as a bioweapon around the world, heightened nationalism, industrial warfare through manipulating the supply chain, bribing Wall Street and information warfare, and spying through TikToc. Reports from CNN and the New York Times on the death of Zang Zemin actually praised a man who organized the organ harvesting industry in China.

Many CCP elites suddenly became rich with “privatization” of companies. Now we see demonstrations in Shanghai openly calling for the CCP to step down. They have locked down the population for many months where you can be imprisoned in your own home or sent to a quarantine camp, like cattle. It’s like the way you deal with animals.

Under Xi Xinping, there has been vast expansion of digital surveillance of comments on social media. You are prevented from leaving your house. Not North Korea, like a West Korea. He thinks the CCP, even though they have so much power, they are also weaker. They are showing the real face of China to the whole world.

Student demonstrators are disappearing. Bodies discovered with no organs, but the Chinese people are losing fear.

Chris Chappell explained that the CCP considers itself to be at war with USA. Their war includes shaping and manipulation of American-based media and Big Tech.

A New York Times reporter said she visited a Beijing hospital where she overheard Chinese doctors talking about getting organs from prisoners of conscience. Her editors told her they didn’t want to cover this story.

The Chinese United Front organization has partnered with JBL lobbying which provides all-expense-paid trips for USA journalists from CNN, NYT, etc. to China. 90% of media in the U.S. is owned by 5 media companies and billionaires who are also doing business in China. Do you think they want to undermine a market with more than a billion people?

A Twitter whistleblower has said that Twitter was making billions in China by giving data to them. When they discovered that a Chinese spy was working in Twitter, they didn’t care.

If you do a Google search “protests in c” it doesn’t suggest “protests in China.” Maryland, South Dakota and other states are banning TikToc. The US military does not allow TikToc because TikToc tracks the location of users. Since China does not allow Twitter and youtube to be accessed in China, why do we allow them to operate here?

Kay Rubacek spoke about psychological control. Her husband escaped from the Czech Republic. Socialism is a precursor to Communism, which survives on lies, deception and murder. Fentanyl is the #1 killer of 18-45 year-olds. It has killed more people than Covid.

The Chinese Constitution says it will follow the CCP. “it’s okay to kill human beings.” Kay sees hope in humanity, valuing every single person under God.

She did an episode on the Berlin Wall. Nov 7 is National Victims of Communism day. In Florida, Gov. DeSantis has approved legislation that schools will teach 45 minutes on the true facts about Communism. Black Book of Communism published by Harvard University is a good start.

We had trials for Nazism, but never for Communism, even though they killed far more than the Nazis. The CCP is afraid of blank pieces of paper held up by demonstrators which symbolize the censorship imposed on them. She was arrested in Tiananmen Square and was in prison for 23 hours for holding a sign that stated one word, Compassion. The Chinese military destroyed and mashed the bodies of the Tiananmen Square protestors into “pie.” International Human Rights day on Dec. 10. There is valuable information at the Victims of Communism Memorial Foundation (https://victimsofcommunism.org/).

The lyrics of the “Imagine” song by John Lennon include: “Imagine no countries, no possessions, no religion.” It’s the same as the promise of the Communist utopia which bans religion, private property and seeks the abolition of national borders through the “forcible overthrow of all existing conditions.”

The devil talks about how he wants to overthrow God. In every Communist country, they dissolve bonds between people by making them fear each other. Their goal is to weaken families and communities which are obstacles to their control. We have to strengthen ourselves so that we can act righteously to resist their agenda.

Question from the audience- why are there no Hollywood movies about Tianaman Square?

Answer: So many Chinese had trauma there and after. Also, many of those who did not live in Beijing do not believe that anything happened there. .

Kay had many of her films banned or canceled at colleges. They receive money from China and are afraid of losing it. A large film festival has been receiving $100k from China every year. They refused the funds, showed her movie and gave it a prize!

Frank, a retired NYPD officer recommended the Eternal Spring a beautiful animated documentary film (official website at https://eternalspringfilm.com), nominated by the nation of Canada for an Academy Award. It shows the persecution of the Falun Dafa practitioners and their efforts to resist. (https://youtu.be/P50mw6A1vCo) 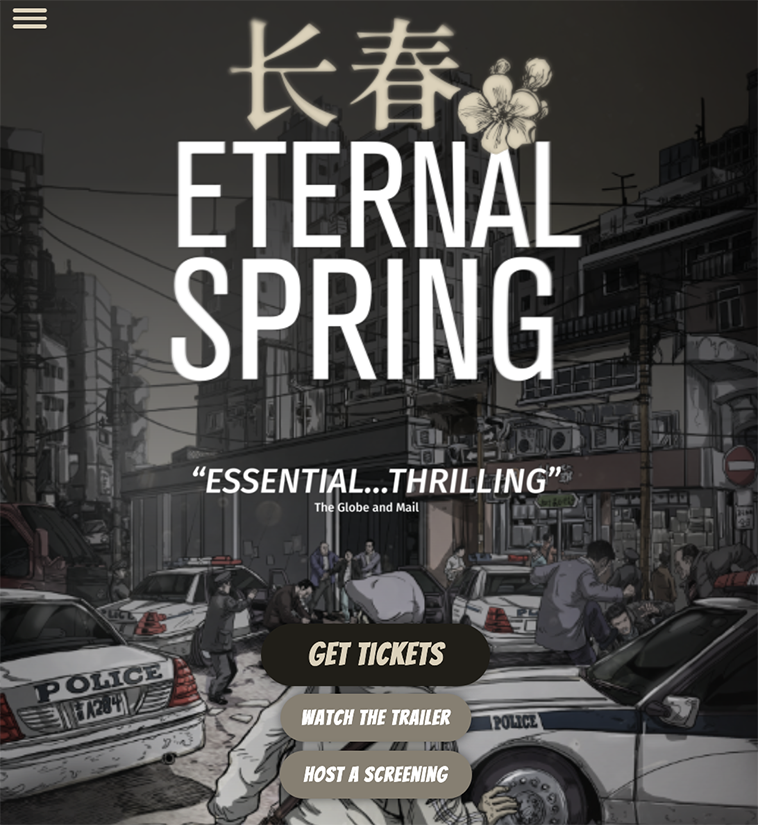